Who Used COVID & Racism to Destroy A Great Nation From “Within” ?

As Reported by the CDC…

And how is it that the hospitals and medical centers get 20% more federal aid by categorizing with any illness / death as COVID?

So, the question becomes: How many people died of COVID and how many died (of other causes) WITH COVID? 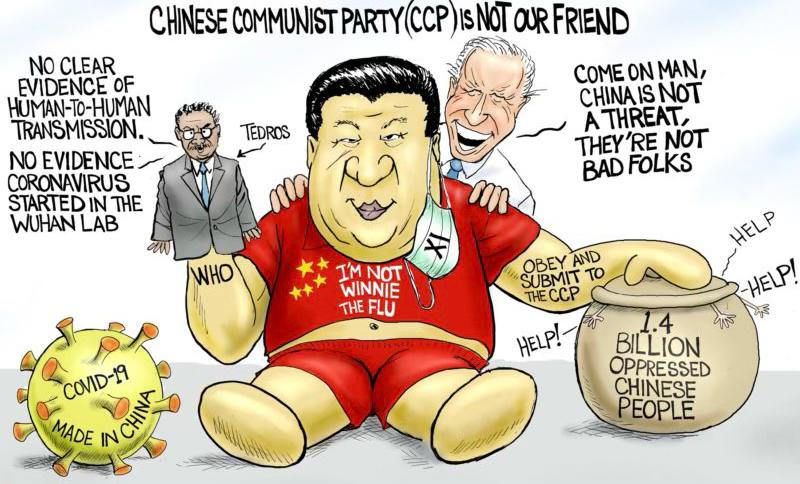 Is this a very well-orchestrated and diabolical plan, or an unimaginable set of events that just fell into place with the United States front and center in an election year?  You tell me!!!

Scare the population with a laboratory created virus (a biological weapon CCP unleased and lied about to the world), force us to wear masks, lock us down in quarantine indefinitely, and then try to enforce every living person in taking an unproven vaccine that is now in question. Then in complete unison spotlight and count the number of dead every second of every day, in every News Headline with the heavy-handed help of Big Tech and its all-powerful and corrupt leaders. As Stalin once said, “control the media…control the world”.

They’ve closed and removed all entertainment and prohibit recreation, closing parks, gyms, bars, museums, restaurants, sport venues, theatre, travel…on and on and on…and worst of all our schools. The children / youth suffer, who are the least susceptible and at risk to the virus. Their social developmental skills have been greatly compromised. Yet, the teacher’s union keeps voting against in room classes. They get full pay and benefits by holding the course. Billions of dollars have been designated and spent retrofitting the schools to be safe environments to return to. But again, senators, governors and mayors fall back on the same old false excuses keeping them closed.

No dating. No touching. No family gatherings. No singing or praying. Isolate people. Dehumanize them. Ignore them. Punish them…as “they” ignore and flagrantly break their own rules right in your face with zero accountability and then lie about it on camera. Hypocrites!!!

They close Temples and Churches – prohibit worship…instill a godless country. They create a vacuum and let depression, anxiety, hopelessness, and desperation set in, as their cancel culture paradigm shift moves steadily and progressively forward.

They ignite hatred, racism, division and civil unrest through every avenue of media 24/7…creating civil war where one side proclaims “protestors (anarchists) are patriotic” who destroy, vandalize and attack innocent people and businesses freely for months on end without any fear of being held accountable. All while accusing and labeling anyone not on their side as “enemies of the state, terrorists, insurrectionists…” silencing any and all opinion contrary to theirs, blatantly undermining the Constitution and our freedom to speech.

They send in Antifa and BLM to destroy at will, as if they are freedom fighters (who demand compensation for their deplorable and unforgivable actions) undermining law and order; riot, loot and attack all law enforcement, burn down countless federal buildings and police stations and chaos on the streets of numerous cities. And in the same breath tell government to order a stand-down. Is this not an “insurrection”?

What has this country become? And more importantly, where is it going?

They empty the prisons because of the virus and fill the streets with hardened criminals. Open the borders to any and all illegal immigrants to overwhelm the system yet ignoring the tens of millions of legal citizens homeless, jobless, helpless, aimless on the streets because of what they created. Do they not care to take of those legally here? They’ve turned a blind eye on the meaning of truth and justice.

We are all being played like fools by those who want to destroy America! They own the system; brainwashing, manipulating, twisting words, twisting minds, wanting nothing more than for all of us to obey and submit (their weak and mindless sheep).

They are selling us out to foreign interests for personal profit. They are making a mockery of all of us. They keep moving the goal post forward every opportunity to push us backwards, slowly gaining more power to control us at their whim. The rules keep changing. Their thirst for more power is relentless fueled by absolute greed.

And they use COVID, racism as their weapon of choice to instill fear, hiding in the shadows spewing nothing but hatred and lies.

They promised a “united” nation for the people…but they are delivering and executing quite the opposite at warp speed, via “executive order” bypassing all semblance of a democracy (the old bait and switch trick) to push through their fascist left-sided agenda. Along with wasting more time and money on an Constitutionally illegal impeachment that’s D.O.A.

This is how you destroy a great Nation from “within” and in very short order.

The principle that “the end justifies the means” is in individualist ethics regarded as the denial of all morals. In socialist ethics it becomes…supreme rule.

Will it work?  I guess that depends on you and me.

【Disclaimer】  While the author endeavors to reveal the truth and keep the information accurate, we make no warranties of any kind, express or implied about the completeness, accuracy, and reliability with respect to the website, the cited information in the articles, or the related graphics.  All views expressed in the “Opinion” section belong to the author and do not represent any organization, committee or other individuals.

All the facts are true ,
Will it work? I guess that depends on you and me.

Join the Resistance
We are the People

[Inauguration Day] President Trump: We Will Be Back in Some Form